Often known as the punk poet of rock ‘n’ roll, legendary musician Lou Reed has died. Reed’s death, on Sunday 27th October at his home in Long Island, was likely due to an ailment related to his recent liver transplant. He had been in frail health for several months.

The lead singer of The Velvet Underground in 1965-70, Reed’s work with the band and subsequent solo work became an influence to generations of writers and musicians who related to his unique blend of raw, dark energy, laconic irony and attention to the street-level, seamy, transgressive side of New York life that involved hard drugs, prostitution, transgendering and sadomasochism. The songs ‘I’m Waiting for the Man’ and ‘Sweet Jane’ off the Velvets’ albums The Velvet Underground and Nico (1967) and Loaded (1970) respectively, demonstrated a commitment to testing the limits of established musical arrangement and subject matter. They led to Ree 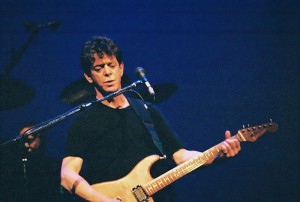 The deceptive depth and beauty of Reed’s songs continually pushed the boundaries of rock lyrics, connecting rock music to the avant-garde, and inspiring writers such as Williams Burroughs and musicians such as David Bowie, Patti Smith, Roxy Music, The Sex Pistols, and a generation later, Nirvana and R.E.M. Reed’s associations with the artist Andy Warhol, who had supported the Velvets and whom Reed cited as a great inspiration for his work, stemmed from a mutual understanding of the power and necessity of popular culture to connect to the people. It was Reed, along with Warhol, who helped reset the limits of what was considered artistically valuable to include both the commercial and the marginal.

Beginning his career as an American outlaw, then, Reed ended it with popular and critical acclaim, earning a place for his hand prints on Hollywood’s Rockwalk, publishing his tour diary in The New Yorker in 1996, and performing at the White House in 1998. His later years were differently musically experimental, exemplified by Reed’s release of the concept album The Raven in 2003, featuring songs after the stories and poems of Edgar Allen Poe.

Reed saw his lifelong devotion to music as an intrinsically American project, chronicling not only the darker and more dangerous and ignored aspects of contemporary life, but encompassing the whole of modern American experience. In an interview for Rolling Stone in 1987, he said: ‘All through this, I’ve always thought that if you thought of all of it as a book then you have the Great American Novel, every record as a chapter. They’re all in chronological order. You take the whole thing, stack it and listen to it in order, there’s my Great American Novel.’

Like many oeuvres that can be similarly defined, Reed’s Great American Novel is over too soon, but will no doubt be read for generations to come.