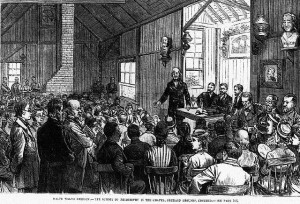 Beginning in 2014, the IAAS Lecture will be an annual event, hosted at a third level institution on the island of Ireland, and presented by an invited member of the IAAS on a topic of their choosing. Broad in its remit, the IAAS Lecture appeals to both academic and non-academic communities, and promotes the long-standing interest in and connection to American culture in Ireland.

It gives us great pleasure to announce that the inaugural IAAS Lecture, ‘Argument and Experiment: Ralph Waldo Emerson’s Essays’, will be delivered by Ron Callan at University College Cork on Friday 14 March 2014, between 5pm and 6pm (reception to follow). It is no exaggeration to say that there would be no IAAS today if it were not for Ron Callan, who was Chair of the Association from 1997 to 2003, and who also served as editor of The Irish Journal of American Studies between 1995 and 2007. An expert on the poetry of William Carlos Williams, Ron recently retired from University College Dublin, where he had a formative impact on the careers of a generation of new scholars in the varied fields of American literature and culture for nearly twenty years. Before joining UCD in 1995, Ron taught at Dickinson College, Carlisle, PA (1990-92), the University of Dublin, Trinity College (1992-94), and University College Cork (1994-95). Ron is a former Fulbright Scholar and held a Visiting Scholarship at the University of Massachusetts at Amherst in 1986.

The School of English at UCC and the IAAS are delighted to host the esteemed Ron Callan as the ideal speaker to begin what promises to be an enriching and exciting lecture series.