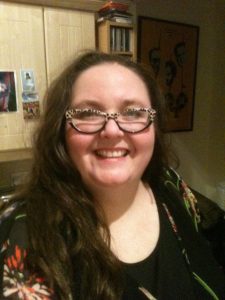 I completed my DPhil in American History at the University of Ulster in 2003. I then taught part-time for quite a few years at both Ulster and Queen’s University Belfast. While working on my DPhil and then teaching part-time, I also worked in the Culture and Arts division of Queen’s University Belfast for ten years and was involved with both the Belfast Festival at Queens and the Queens Film Theatre. I joined Ulster in 2009 as a full-time Lecturer in American History.

Currently I am researching Virginia Hill Hauser, bag lady for the mob – she’s been described as “dumb like a fox”. She knew and kept some very scary people’s secrets. She was an expert manipulator, not just of the mob but the media and Hollywood too. I think it’s time that there was a history of organised crime article that had a strong female protagonist.

I’d like to say Rebel Wilson but for realism it’s definitely Hattie Jacques.

I gave a paper at an IAAS conference pre-millennium and was a member for a while but disappeared for a bit. My mentor, Tony Emmerson, then harassed me for a long-time to join again so I did in a low-profile way. Then when he passed I felt it was my duty to get more involved. I attended the AGM in April 2016, blinked and found I had gone from a spectator to an ordinary committee member to the new Treasurer.

Per aspera ad astra (Through difficulties to the stars)

Well, if it’s Thursday then it’s meatloaf – are you not paying attention? On other days it might be a nice lamb curry or more probably marmite toast. But there’ll be brownies, I promise.

First person who came into my head was Grizzly Adams but apparently he’s not “real” or a hero. Then I thought of Guy Gibson, a brilliant and courageous WWII bomber pilot, grounded by his superiors due to his propaganda value, and finally struck down on a sneaky night mission by friendly-fire. But I’m going to have to go with my hometown hero, newly crowned double Olympic gold medal winner, Max Whitlock. I find a forward roly-poly quite challenging so Max is definitely a hero to me!

I am the current IAAS Treasurer and I like to spend money, especially when it is not mine. The IAAS has numerous prizes, early career bursaries, and travel grants, especially for post-graduates, so get entering for these and help me send you the Association’s money!