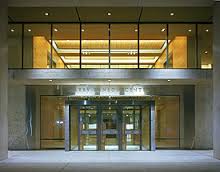 Catherine Casey is a PhD candidate in the School of English, Drama and Film at UCD where she is working on a dissertation entitled ‘Gender, Space and Power in David Mamet’. With the help of a travel bursary from the IAAS, Catherine was able to travel to the Harry Ransom Center in Texas recently to carry out some important research.

The Harry Ransom Center in Austin, Texas, USA is an internationally recognized archive of primary material on David Mamet’s work in theatre and film that was recommended to me by my supervisor. The Center’s resources include earlier drafts of Mamet’s canonical works, annotations on staging, correspondence, as well as audio and DVD/video recordings of master classes held in a range of American universities on his unique approach to directing for film.

Founded in 1957 by former president and administrator of the University of Texas, Harry Huntt Ransom (1908-1976), the H.R.C. is an archive, library, and museum specializing in the collection of literary and cultural artifacts from the U.S. as well as Europe for the purpose of developing scholarship in the area of arts and the humanities.

The Mamet collection is quite extensive consisting of more than 300 boxes, as well as sound recordings and films. Since much of the material is not classified, I needed to focus my search on material specifically pertaining to selected works related to my thesis.  Research involved a number of activities. I scanned and compared earlier drafts of iconic works to evaluate how the final draft was developed; listened to recordings, and viewed films on all aspects of his work, including those that outline Mamet’s epistemological directing approach and its relevance to the theories of Russian film theorist Sergei Eisenstein. I examined documentation on Mamet’s correspondence with other practitioners. A number of scans of folders for use in Dublin were also ordered.

This research trip was very fruitful. I retrieved several pieces of archival material on Mamet that are imperative to my academic research.  They directly relate to analyses I have initiated, supporting and extrapolating arguments and aiding the primary and original value of my research. This research required that I be in situ in the Centre since most material was not catalogued. Importantly, I secured copies of unique correspondence between Mamet and English director and playwright Harold Pinter pivotal for critical scholarship on Mamet.

I would like to take this opportunity to thank my supervisor Dr. Catherine Leeney for her guidance and support as well as the School of English, Drama and Film in U.C. D. Also my special thanks to Dr. Alan Gibbs, Dr. Dara Downey, and the Irish Association of American Studies for their generous funding without which this trip would not have been possible.