Earlier in the year, the IAAS awarded two bursaries to assist postgraduate students with attendance at the biennial EAAS conference in Romania. Eve Cobain, Trinity College Dublin, was one of the awardees.

I was the happy recipient of a bursary to attend the EAAS conference, held in the Romanian seaside town of Constanta back in April this year. The EAAS Biennial is a behemoth conference, with up to fourteen sessions running at one time. Over three days, I attended papers on subjects ranging from queer performance to abject toys, neoliberalism to contact improvisation. As a devout reader of poetry, particularly the middle-generation American poet John Berryman, much of this was unfamiliar territory, but the assortment of voices and activities brought me to a renewed enthusiasm for my work as part of the American Studies scene more broadly. 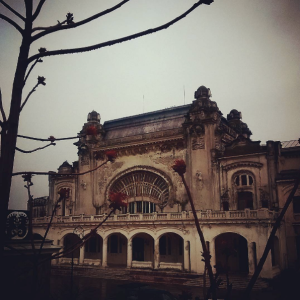 A particular highlight was the evening extravaganza, “A journey through blues and swing to Armenian ethnic jazz,” led by Harry Tavitan, alongside daughter, Aida Tavitan. From the end of the ’70s, according to the conference brochure, Tavitan became the leader of the avant-garde movement in Romanian jazz. It was fascinating to see how blues and jazz, as musical forms born in the US, have melded with local Romanian and Armenian musical traditions – the result was arresting. An additional highlight was Tavitan’s reading of Langston Hughes’ “The Weary Blues,” which was conducted with the same feeling and intuition as observed in his musical practice.

My own panel took place on Sunday the 24th April between 11am and 1pm, giving lots of time for discussion between participants. First up, Ulrich Adelt, from the University of Wyoming, spoke about Blues, Race and the Civil Rights Movement. Having observed the title of this paper on the programme a few months previously, I had become a little anxious about my own subject: John Berryman’s treatment of the blues. Ulrich focused particularly on white performance and masculinity in the 1960s, explaining how women artists during this period were often overlooked or silenced. Indeed, it was during this period that John Berryman was working on his most blues-focused poems. The interaction between the two papers caused me to reevaluate Berryman’s blues poems, which celebrate the work of female artists, Bessie Smith and Victoria Spivey. While Berryman’s tendency toward mimicry was still in question, then, I came away with an added perspective: that the poet’s decision to focus specifically on women artists during this period in which men held sway was at least partly a political one. Gavin Cologne-Brookes of Bath Spa University brought the panel to a close with a pragmatic and optimistic paper on Springsteen and the “Uses of Art”.

Another panel, chaired by two scholars from my alma mater, Queen’s University Belfast, also left an impression. On a panel entitled “Negotiating the Seen and Felt: Where American Art meets American Writing”, Catherine Gander and Sarah Garland explored ideas of text and embodiment, and the relationship between word and object. Catherine Gander’s paper in particular raised questions surrounding the radicalised body (through the work of Basquiat and Rankine, amongst others), as well as the politics of the textual image, while in Sarah Garland’s discussion of Aspen, the magazine in a box, the notion of “reading” was troubled yet further.

The conference was rounded off with the banquet to end all banquets – where our own Philip McGowan was announced EAAS president-elect – and an open bar that had us all upstanding.