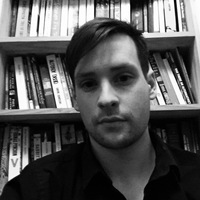 Earlier this year, David Deacon, a PhD student at University College Dublin, was the first-place recipient of the IAAS Postgraduate Research and Travel Bursary.    Below, he reports on how the grant has facilitated his work, and offers us a fascinating insight into his research.

It is no secret amongst the dedicated community of Cormac McCarthy scholars that the reclusive novelist and playwright is well acquainted with Ireland. Much of The Road (2006) was certainly completed here, with select pieces of his written correspondence during this period appearing on headed paper from The Shelbourne Hotel, amongst other notable locations around the country. At the end of 2005, as the novel neared publication, he writes to his acquaintance and avid book collector, J. Howard Woolmer, stating, “I was in Ireland most of last summer and got quite a bit done. The place has changed a lot. Money will do that.” It seems he didn’t make much of our era of material prosperity. Perhaps a premonition of its imminent decline informed the mood that would bring us one of the most important novels of the decade. Nonetheless, the opportunity afforded to me by the IAAS Postgraduate Travel Bursary ensured a very valuable change in the trajectory of my own thinking and appreciation of McCarthy, quite distinct from those he was so unsure of ten years ago.

Prior to my visit to McCarthy’s archives in The Wittliff Collections, located at the State University of Texas, San Marcos, I attended and presented a paper at “God and the American Writer,” an American Literature Association conference held in San Antonio. The paper argued for the presence of “difficult atheism” flowing through the author’s later prose. This concept was informed by Christopher Watkin’s 2011 book, in which he suggested that atheism, materialism and secularism are being thought of anew in contemporary philosophy — an assertion that I transposed to McCarthy’s philosophical prose. The panel was chaired by Stacey Peebles, and saw lengthy and passionate discussion between all panelists, along with notable McCarthy scholars Steven Frye and Allen Josephs, who were in attendance.

The Wittliff Collections kindly facilitated my week long visit to McCarthy’s archive, where I began by immersing myself in the collection of letters between the author and J. Howard Woolmer, mentioned above. These letters afford the scholar a rare glimpse of the thought process and laconic humour possessed by the quasi-ascetic novelist, from reports of hunting bears with hounds, to dreading the cessation of his MacArthur grant in the mid-1980s because he’d “gotten used to eating regularly.” The visit also afforded me the opportunity to acquaint myself with the unpublished screenplay, Whales and Men, the only copies of which reside in the Wittliff Collections. In it, his protagonists muse upon the communicative abilities of whales, and as such McCarthy’s astounding knowledge of and obsession with linguistics becomes evident to the visiting researcher. The unique, intrinsic, and central capacity of language to human experience, and the manner in which it can convey meaning, whilst simultaneously expressing the utter lack of it available to our conscience when subjected to a postmodern critique, forms a recurrent theme and concern in the extensive notations on drafts. Wittgenstein receives several mentions, whilst his love of Plato, Aristotle, and Nietzsche are in plain sight throughout, reminding us of the philosophical erudition that informs all of his writing. It is this richness which will keep scholars visiting and revisiting the archive for the foreseeable future.

With assistance from the IAAS, I was able to explore and contemplate these sources. They will undoubtedly inform and enrich my own PhD thesis, in part investigating McCarthy’s appropriation of religious ritual and sentiment, creating a postsecular tension in his later writing. My sincere thanks go to everyone at the Association.