Tim Groenland recently completed his PhD at Trinity College Dublin and was elected as an Ordinary Committee Member at the AGM last April. 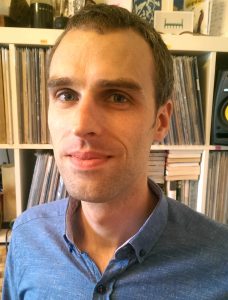 After doing an undergraduate degree in UCD I spent several years playing music and working in miscellaneous jobs, many of which involved the provision of customer service relating to products I didn’t understand. I started to feel the pull of serious book-learning again and gravitated back to Belfield to do the MA in American Literature (then run by the incomparable Ron Callan), which was a great, energising experience. This confirmed to me that scholarship was my natural habitat, and I continued on into a PhD in Trinity.

I’ve just finished that PhD, which studies the editing process in the fiction of Raymond Carver and David Foster Wallace, and am still researching in the same vein to see where it takes me. I’m interested in contemporary US fiction, editors and editing, and everything to do with the institutions and networks involved in literary production. I also worked with a lot of manuscripts and drafts during the last few years, and have become very interested in how literary archives (and writers’ working methods) are changing in the 21st century.

I hate to pick favourites since the answers to these questions change every day. But if I’m being packed off to a desert island right now I’ll take Moby-Dick, The Big Lebowski, and Stevie Wonder’s Innervisions.

Nicolas Cage. The plot would be little more low-key than what he’s used to, but I’m confident he’d enliven the material.

Well, the community of Americanists in Ireland is small enough, so it became obvious pretty soon into my PhD that the IAAS was the best place to go to meet them! More specifically, I joined to go to the 2014 conference in Galway and then presented a paper at the postgrad conference later that year. I’ve found the conferences to be a great way to share ideas and get feedback from a supportive and enthusiastic group of people.

Some, um, Catcher in the Rye bread to start with. For the main course, a choice of Tortilla Flats, Burrito Cereno, and Lunar Pork (for the vegetarians – Uncle Tom’s Cabbage).

Dessert: why, some Grapes of Wrath of course, and maybe a slice of Tell-Tale Tart?

(Let’s stop there. And if you think these are bad, you should have seen the ones I didn’t use).

Ron Callan, of course. I thought this would be everyone’s answer.

I’ve just joined the editorial board of the IJAS and am excited to be involved in getting new work published. There’s some intriguing stuff lined up for the near future, and I’m looking forward to seeing what comes in to us next. If you have an essay you’d like to send out into the world, or if you have an idea for a feature that you think might be of interest (an interview, for example) please get in touch! I published an essay of mine there last year, and it’s an excellent way to get your research peer-reviewed and published in an accessible way.