Continuing our Meet the Committee series is the current EAAS rep Dr Philip McGowan. Philip is also the current President of the EAAS. Visit their website here to find out more about what they do. 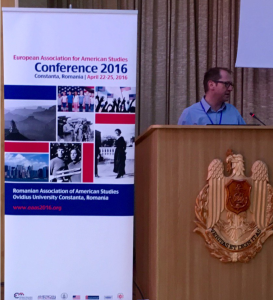 Well, after completing my PhD (1997) at Trinity College Dublin and seven years of working at Goldsmiths’ College in London (1998-2005), I was appointed by Queen’s University Belfast. Among the first thing I wanted to do here was to bring the annual IAAS conference to Queen’s, which we did in 2006 and again in 2011, by which time I had moved from being Secretary to the IAAS to being its Chair. I vacated this role in April 2016 at the AGM during our hugely successful IBAAS conference, again at Queen’s, and now find myself the President of the EAAS until 2020. So, you know, careful what you wish for and all that.

Tell us a little bit about your current research interests

I was hoping you might do this bit for me… Right now, when I get the moments, I am looking at Elizabeth Bishop’s poetry and how she surreptitiously (I believe) folds philosophy into her work. Poetry does seem to be taking up most of my time these days when it comes to research: I have other articles in process on John Berryman, Wallace Stevens and Mark Doty, but will also be pulling together another on F Scott Fitzgerald’s short stories from the 1930s for the F Scott Fitzgerald Review (most likely in 2017).

Too hard to narrow this down. I have loved William Maxwell’s fiction for quite some time now and still can’t quite understand why he has been so overlooked. Jack Lemmon’s performance in Save the Tiger (1973) makes that one of my favourite films. No idea about a favourite album: listening to The Wedding Present a lot again recently, and New Order’s Power, Corruption & Lies was the first album I bought and it still sounds brilliant 33 years on; so, an indie kid still at heart.

Americans regularly tell me I remind them of Edward Norton. So him, I guess.

Stephen Matterson, my PhD supervisor, suggested I present at the annual conference in St Pat’s in Drumcondra in 1994 or 1995. So 21 or 22 years and counting now.

Ha. Um, I guess something from Emerson – “Do not go where the path may lead; go instead where there is no path and leave a trail.” Or “What lies behind you and what lies in front of you pales in comparison to what lies inside of you.” These, of course, would be used provided Ron Callan can be this university’s permanent President.

The person who resurrects Leeds United.

You should have asked me this 5 years ago… When I became Chair of the IAAS I was really keen to grow our membership numbers and when we hit the 100 member mark it was a real pleasure to see our late Treasurer, Tony Emmerson’s, smile at that fact. The IAAS is now tucked in among the middle membership associations in the EAAS – still nowhere near Germany’s 1100 members mind you, but if we can keep our membership numbers buoyant and between 100-150 I think we will be well set to support postgraduate and early career scholars for years to come. As President of EAAS I’ve set myself and the Officers and the European journal team some ambitious and challenging goals: relaunch the EAAS website and the EAAS journal in time for the next EAAS conference, in London in 2018; produce a fairer set of subscription rates in relation to postgraduate and concession members across all of the associations; look at how to support the smallest Associations to help them increase membership; look at how we collaborate with other American Studies associations internationally. So plenty to do, but all hopefully to the benefit of EAAS members.