Next up in Meet the Committee is Katie Ahern, one of our PG & ECR reps, who is based at UCC 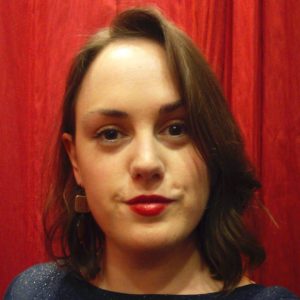 I did a BA in English and Irish in University College Cork, during which I took a lot of American literature courses and discovered a lot of authors I’d not encountered before. This then led me to do a Masters in Twentieth-Century American Literature and Film, in the School of English. During my MA I read the novels of Anzia Yezierska and Edith Wharton, and fell down a research rabbit hole which brought me to do my PhD on both those authors.

My PhD thesis, ““All Night Long I Walked the Streets, Drunk with my Dreams”: A Comparative Study of Urban Space in Twentieth-Century American Literature” analyses American novels set in the urban environment to investigate marginalised identities and establish the ways in which neglected identities were conceived of by twentieth-century American writers.

Any novel by Louise Erdrich.

A professional cookbook collector – for such a thing should exist.

Meryl Streep – because she’s played nearly everyone else.

I attended the IAAS PG symposium when I first started my PhD, discovered that it’s a great way to meet other people involved in American studies in Ireland, and was hooked by the idea that others understood the intellectual and emotional morass involved in doing research!

“You should be writing.”

Curry. Or else soup.

Dana Scully – despite aliens, inept bureaucrats and evil government forces interfering in her life, she gets stuff done.

Calling all postgrads to join the ranks of the IAAS and make your views known!
The conferences and symposia are interesting, and a great way to meet other scholars in the area. I encourage everyone to think about joining the committee, or helping to run a conference. It looks good on the CV as well – proof that one can play well with others.