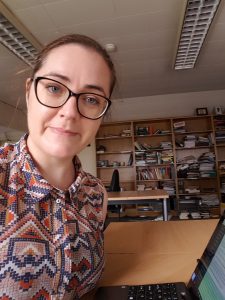 I finished my BA at UCD in 2003 and had great plans to keep going in academia after completing the MA in American Literature (also at UCD) in 2004. Then, y’know, I had bills to pay so I worked for a while. Then I got bored of that and went back to do the American Studies MA at the Clinton Institute and had such great plans to continue in academia once I finished that in 2006 except, y’know, plans don’t always work out so I went off and worked in retail/admin/anything that paid for a few years. After many conversations with the legendary Ron Callan, I finally, finally started a PhD in Trinity in 2012. Having just passed my viva in June (hurray!) I can safely say I have no idea where I am.

TL;DR: I took the scenic route.

Well. My thesis looked at masculinity in American fiction, specifically Richard Yates, Richard Ford, and Jonathan Franzen. It also had stuff on suburbs, and exceptionalism, and identity… so I’ll probably keep going with that for a while because it’s FUN. Outside of that, I also work on Marilynne Robinson, and have always had a soft spot for Presidential speechwriting so might do something on that soon. My thesis for the American Lit MA was on John Steinbeck’s use of the Bible, and my thesis for the American Studies MA was on faith-based initiatives so religious things get a look in quite a bit in terms of what I like to think about as well.

Book: Gilead by Marilynne Robinson; The Easter Parade by Richard Yates; Canada by Richard Ford; Witches Abroad by Terry Pratchett; The Elements of Style (I’m not even joking).

Film: The Castle (the Australian comedy). Oh! And Submarine. And also It’s A Wonderful Life. Zuzu’s petals get me every time. Also The Umbrellas of Cherbourg, because I’ll never not be amazed by the colours and the costume design and the wallpaper-matching clothes.

Album: Um. I’m going to cheat and say the album I’ve compiled that consists of REM’s entire back catalogue (but not Around the Sun). If I have to base my selection on current heavy rotation, Veckatimest by Grizzly Bear. Or In Rainbows by Radiohead. Or Closing Time by Tom Waits.

Speechwriter. Or baker. Or general organiser of stuff, if that’s even a job.

I was told once I looked like Rachel Weisz. Poor Rachel. So I’ll go with Allison Janney because everyone would just be all like “Oh my God, Allison Janney is SO cool!” and she would win all the awards and I would accidentally become cool as a result.

I heard vague rumblings about it in my first run at postgrad work in the early 2000s. I might even have gone to something once. Then it fell off my radar until I started the PhD and my supervisor, Stephen Matterson, made it sound like I would fail at life if I didn’t at least join the association. So I did that, and ended up getting one of the PG bursaries to go to the BAAS postgrad conference in 2012 so I thought that this association knew what it was doing. Then I made the big mistake of going to the AGM at the Limerick conference in 2013, and by virtue of being the only other postgrad in the room besides Rosemary, I got nominated as PG rep, and since 2015 I’ve been the Secretary.

In other news, my term expires next year.

We always have time for coffee. But in Latin.

I’m not great for the main courses. I could rustle up a nice pie? Or some lasagne? My forte is desserts so maybe we could all go out for lunch then head back to mine and I’ll wheel out a dessert trolley. There’ll be the best lemon and mango cheesecake you’ve ever tasted. Maybe some red velvet cake. And some chocolate cake. Shortbread? Something involving rhubarb. And crumble. Rhubarb crumble. Custard! Basically, send me your cake-based requests and I will provide it.

Things I’m currently working on include an edited collection for McFarland on Richard Yates (forthcoming in 2017), a special issue of the Irish Journal of American Studies on Marilynne Robinson (also in 2017), and finding a job (insert year here). If you’re interested in any of those things then get in touch!

More to the point, please get involved in the IAAS! In the few years I’ve been involved it has been kind of amazing to see how much it has grown and evolved into something really great. It would be lovely to see that continue with a whole bunch of enthusiastic new people getting involved and bringing exciting new ideas to the table. Tell all your friends, and bring them to events with you, and even if you don’t want to be on the committee send us your ideas anyway. We love a good idea and will always accurately cite our sources.