David Coughlan is a Lecturer in English at the University of Limerick, and is the Executive Editor of the Irish Journal of American Studies 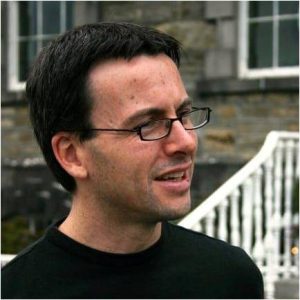 Currently, I have a book coming out, called Ghost Writing in Contemporary American Fiction. The blurb says, “This book examines representations of the specter in American twentieth- and twenty-first-century fiction. David Coughlan’s innovative structure incorporates chapters on Paul Auster, Don DeLillo, Toni Morrison, Marilynne Robinson, and Philip Roth, alternating with shorter sections that connect the significance of the ghost to the philosophy of Jacques Derrida, particularly within the context of his 1993 text Specters of Marx. Together, these accounts of phantoms, shadows, haunts, spirit, the death sentence, and hospitality provide a compelling theoretical context in which to read contemporary US literature. Ghost Writing in Contemporary American Fiction argues at every stage that there is no self, no relation to the other, no love, no home, no mourning, no future, no trace of life without the return of the specter or, that is, without ghost writing.”

Don DeLillo’s The Body Artist, which is a masterpiece; Wes Anderson’s The Royal Tenenbaums, and not just for Owen Wilson as Cormac McCarthy; and Sufjan Stevens’s Carrie & Lowell, which I saw him perform live in the Kings Theatre, Brooklyn, unforgettably.

In this alternative universe, I’d be aide to US President Jennifer Daly.

For a long time, I was “involved” with the IAAS without realising it. In my second year in UCC, I took Introduction to American Literature with Sue Norton, now in DIT and a former treasurer of the IAAS. In my third year, I took Twentieth-Century Fiction with Ron Callan, former Chair and current President Emeritus of the IAAS. In Goldsmiths, I tutored on Modern American Fiction when the lecturer was Philip McGowan, former Chair and current EAAS Representative of the IAAS. So the IAAS has been there at every stage of my life in American Studies. But it wasn’t until 2012 that I attended my first IAAS conference and got properly involved – so properly involved that we hosted the conference in UL the following year.

“To learn to live finally” (Derrida, Specters of Marx xvii).

I’m on the committee as the Executive Editor of the Irish Journal of American Studies, the journal of the IAAS. The journal first appeared in 1992, edited by W. T. M. Riches (after whom the IAAS essay prize is now named) and Stephen Matterson. It included articles by Milton Cantor and Steve Ickringill and a tribute to Alan Graham (a founding member of the IAAS), and it published the first Alan Graham Memorial Lecture, delivered by his good friend George Shepperson. The journal has, since its inception, been at the heart of American Studies scholarship on this island even as it has published work from around the world, including an essay by Angela Davis and an interview with John Updike. The journal has also seen a number of changes, going online in 2009 and, more recently, adopting a rolling publication format. I’m proud to be in a position now to continue the extraordinary work of the previous editors and to ensure that this vital journal remains the place to publish on American Studies in Ireland.