Dara Downey is the Vice Chair of the IAAS, and chair of the prizes subcommittee. 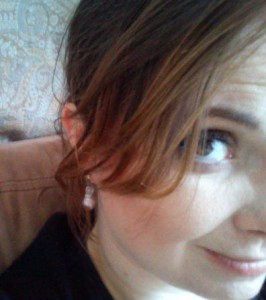 Well, where I am now is still kind of up for grabs, but really it all started with a 2nd year essay during my undergrad degree in English in Trinity, on Nathaniel Hawthore’s The Scarlet Letter and Stephen Crane’s “The Blue Hotel.” It was sort of about American space and fear and gender and, like, stuff, and it was really really hard to write. Anyway, then I started seeing things in the cinema like Sleepy Hollow and Lake Placid, and I realised that the essay contained the germs of a much bigger idea. My PhD (also in Trinity) ended up being on American haunted houses, and my monograph (which came out of a lovely IRC postdoc) is on American women’s ghost stories and material culture, but those initial ideas about space and the settlement of the land have always been a major part of my thinking. Job wise, I’ve worked in Trinity, UCD, Maynooth, St. Pat’s, and Independent Colleges, and in the autumn I’ll be back in Trinity. From there – the world is my lobster!

I’m currently working on a new monograph on servant and slave figures in American uncanny fiction. It’s going to be in two parts – the first, on the period from before the Civil War to the decline of the servant system (so roughly 1850 to 1930), and the second on neo-Victorian novels like Rhys’s Wide Sargasso Sea and Morrison’s Beloved that re-imagine the nineteenth century. The focus is on the ways that WASPy masters and mistresses interact with their African-American or Irish-American servants and slaves, and how they position the people they employ as somehow more in tune with the supernatural due to their ethnicity and religious beliefs.

Shirley Jackson’s We Have Always Lived in the Castle, Elizabeth Hand’s Waking the Moon, and Diana Wynne Jones’ Charmed Life. I also like Moby Dick, though, honest! But mainly Buffy the Vampire Slayer – Buffy fixes everything and is endlessly rewatchable.

I’d be a kind of writing guru – not just for people doing academic-y things, but everyone who finds themselves having to write something and is daunted by the task. That, or someone who reads people’s dreams.

I’d love to think it’d be someone cool like Janeane Garofalo or Amy Acker, but I’d settle for Rose McIvor (she’s in iZombie) [she said, modestly].

I suspect it was Bernice Murphy (one of our committee members) telling me about it in the first year or so of my PhD (she told me about pretty much everything I needed to know at that stage). Anyway, I ended up giving my first conference paper at the postgrad symposium in UCD, and it was a lovely experience (considering I was completely terrified). I got some really useful suggestions for books to read, and met some people who I still know to this day (including our wonderful former Treasurer Tony Emmerson, who sadly is no longer with us, and who treated me like a grown-up when I felt like a total imposter). My memory is hazy, but I seem to have just kept going to things, somehow ended up on the committee (which I really enjoy), and have more or less been on it ever since.

Er, probably pizza or Thai food from my nice local take-aways. I don’t really cook well with others.

This is a bit soppy, but my secondary-school English teacher, Mrs Madden, who I was lucky enough to have for Classical Studies and German as well. She really was just the most encouraging, passionate, no-nonsense teacher I’ve ever had, and I don’t think I would be where I am today if I hadn’t been taught by her. Either her or Buffy.

Well, firstly, the Irish Journal of American Studies is a really great, online, open-access, peer-reviewed publication that you should all submit to (I mean send in work, not grovel). We now publish articles individually on an ongoing basis, rather than waiting to group them together into one big issue, which means that your work will be published very quickly. And really, as I hope I’ve conveyed above, the IAAS overall is something that it’s well worth getting involved in. American Studies can get somewhat sidelined in this country, and it’s so helpful to have a community of scholars who can share knowledge and make things happen – you never know where it might take you. Plus we have prizes and bursaries! As Vice Chair of the committee, I’m in charge of the Prizes subcommittee, and giving people money is just the loveliest part of the gig. So check out what we have to offer and apply! (But join first. And submit.)