Over the next few weeks, we’re going to introduce you to the members of the Executive Committee. First up is Dr Bernice Murphy! 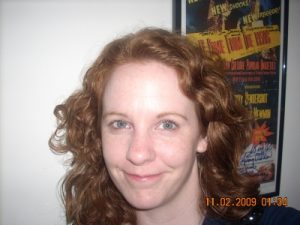 After doing a BA in English and an MA in Modern Literary Studies at Queen’s University, Belfast, I was accepted for PhD study with Stephen Matterson at Trinity. My thesis focused on the work of Shirley Jackson, who was, at the time, a rather outrageously neglected figure (although this is thankfully no longer the case). I looked at her work from within the framework of the historical and cultural context of 1950s America, and it exposed me to a wide range of ideas and subject areas. I’d always been a pretty solid (though by no means exceptional) college student, but I realised pretty early on at TCD that something about the process of PhD writing and research really suited my inherently anti-social tendencies. In short: I wanted to keep on doing This Kind of Thing, if possible. With Stephen’s encouragement, I started work on my first book during the final year of my PhD, which was an edited collection of essays on Jackson (the first of its kind). I then spent almost three years in miserable post-PhD limbo, working as a TA and unsuccessfully applying for the kinds of academic jobs that require you to set aside a week to fill in the 40 page application form and then take six months to let you know you don’t have an interview. I was finally granted a reprieve when I won an IRCHSS Postdoctoral Fellowship, which allowed me to write my book The Suburban Gothic. Essentially, that fellowship made it possible for me to have a viable academic career – just as it was finishing up in 2008, a job as lecturer in Popular Literature opened up at TCD, and my skills and research interests were a good match (it’s actually still, to my knowledge, the only post of its kind in the world – I was fortunate to be in the right place, at the right time). I started my new job on the exact same day that Lehman Brothers bank collapsed. Little did I know then that it would be almost a decade before we had name brand-biros in the school stationery cupboard again (and even now, we have to share one between three of us).  But it’s all downhill from here!

Tell us a little bit about your current research interests

My research so far has mainly focused on the study of place and space in American horror and gothic narratives, and I have published monographs about gothic suburbia, backwoods horror, and the highway horror film. However, over the last year or so, I have been working on a couple of projects related to popular literature in a more general sense: a text book that is intended to introduce undergraduate and postgraduate students to Key Concepts in Contemporary Popular Fiction, and, with Stephen Matterson, an edited collection featuring 20 essays on leading genre authors, called Twenty-First Century Popular Fiction (both forthcoming from Edinburgh University Press). After I get those finished, I intend to lie down in a darkened room for several months, and then gradually start work on the final instalment in my ‘places in the American Gothic’ series. I also have a couple of pretty cool article ideas I want to develop over the summer, though who knows what will become of them. It’s been a very busy couple of years writing, so I am really looking forward to being able to slow down a bit, and engaging in the kind of seemingly rather aimless background reading that so often leads to the accidental formulation of interesting ideas.

Book: We Have Always Lived in the Castle by Shirley Jackson

Film: That’s a toss-up between Carrie, Notorious and the 1976 adaptation of Invasion of the Body Snatchers at the moment, though this list changes on a fortnightly basis.

Album:  Dated but true answer: Dummy by Portishead.  I almost cheered when ‘Sour Times’ was used to score a particularly on-the-nose scene in The People Versus O.J. Simpson.

I would probably be an extremely inept secondary school English teacher who gets sacked for making age-inappropriate jokes about the suggestive similarities between Ed Gein and Boo Radley.

That’s a tough one, but it comes down to a tie between Angela Lansbury and Eva Green. I feel that Lansbury would capture my quiet dignity and skill for amateur crime detection, whilst Green would convey my intermittent bouts of demonic possession with terrifying aplomb. I suggest they take alternate scenes, except for when portraying my lecturing style – then both of them should appear, ‘William Wilson’ style.

I was bundled into the back of a van on the way to college one morning and ‘encouraged’ to join if I wanted to keep researching American literature.  But it turned out to be one of my most rewarding abductions ever!

Actual Answer:  Back in 2001 or 2, my PhD supervisor sensibly advised me to give my first ever conference paper at one of the annual IAAS postgrad symposiums, which was held in Cork. I was very favourably impressed by the quality of the contributions from the other students and by the openness and friendliness of the organisation at large. It was also very useful to be exposed to papers that came from a broader American Studies perspective than I would normally have encountered during the course of my own research, which was quite nuclear holocaust and unhappy suburban housewife-centric at the time.  (Nothing much has changed there).

“Grimdark University: Preparing Our Students for a Dystopian Tomorrow, Today”

If you have the good manners to ring me a couple of hours beforehand with advance warning, I’ll rustle up some half-way competent casserole or a really nice stir fry. If you show up unannounced, it will be cream crackers and peanut butter, at most.  The chippers round my way are all pretty mediocre.

I have quite a few. Before the age of 12 or so, Joan of Arc, Miss Piggy, and Constance Markievicz all loomed large: as a horror obsessed teenager it was Stephen King, whose writing on the horror genre introduced me to the idea that one could actually study popular literature for the first time. Shirley Jackson, whose work is the reason that I have an academic career at all, is the writer I idealise most. I also have huge respect for Joyce Carol Oates (the most likable famous writer I have ever seen up-close in person, and a stellar and underappreciated talent), and Davids Cronenberg and Bowie.

As a committee member, I would strongly encourage Irish-based students or academics working on any aspect of American culture or society to join the IAAS – it’s an immensely worthwhile and welcoming organisation.

Prospective students for the M.Phil in Popular Literature (which I direct) can find information on our course here: https://tcdmphilpoplit.wordpress.com/

Key Concepts in Contemporary Popular Fiction and Twenty First Century Popular Fiction are both out later this year from EUP. The collection Lost Souls: Essays on Horror and the Gothic’s Neglected Personages, which contains more than 50 short essays on overlooked but fascinating genre figures, is also out soon, from McFarland and Co.  I co-edited it with Elizabeth McCarthy, with whom I also co-founded and edited the online Irish Journal of Horror and Gothic Studies, which is still going strong with a great new team, ten years later.