Alan Gibbs is a Lecturer in American Literature at UCC’s School of English, and is also Associate Dean for Graduate Studies in the College of Arts. He was elected to the position of Chair of the IAAS at the AGM in April 2016 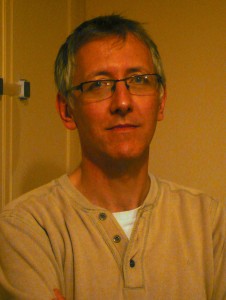 Following an attempted (but, in 1988, aborted) undergrad degree in what was then Coventry Polytechnic, I moved to Bristol. After a few years there, I went back into academia via a part-time English degree at the University of the West of England (UWE), which featured a generous smattering of American literature, including Henry Roth’s novel, Call It Sleep (1934). Before I started my English Masters at UWE, I read Roth’s more recent novels, and thought this would make a good topic for my MA dissertation. Turns out it also made a decent topic for a PhD, in the School of American Studies at the University of Nottingham. Got my PhD in 2005, and after a year’s pretty intensive temporary teaching at Nottingham, was fortunate enough to land my current job in the School of English, University College Cork.

As with the previous monograph, Contemporary American Trauma Narratives (Edinburgh University Press, 2014, but still available at a generous price), I’m looking at contemporary America, but now broadening the scope a bit to include film, television, etc. I’ve also switched focus a little, and am now investigating manifestations of naturalism in contemporary American culture, in writers such as Cormac McCarthy, Lionel Shriver, Philipp Meyer, and Jess Walter, but also films including All Is Lost and There Will Be Blood, plus TV series such as The Shield and Breaking Bad. I’m trying to link these manifestations of naturalism with prevailing cultural and political discourse in post-9/11 America, in particular the widespread notion of victimhood.

In order not to be boring and choose Moby Dick, I’ll say Jorge Luis Borges’ endlessly fascinating Collected Fictions. I can never decide on a favourite film between Vertigo, Twelve Angry Men, and King of Comedy, but if pushed would probably choose the first. Favourite album revolves around several choices, but Loveless by My Bloody Valentine is always right up there, closely followed by any number of Sonic Youth, Low, or Wedding Present albums.

I like to think that after a successful professional football career, I’d now have a cosy punditry job. More likely, I’d be a failed writer.

After extensive consultation (I asked my wife), Hugh Laurie gets the gig.

Same as everyone else: Philip McGowan twisted my arm.

“Eruditio in se est finis”, which, Google translate tells me, is Latin for “Learning is an end in itself” (so if it actually means “don’t keep eggs in the fridge”, don’t blame me). Anyway, the point is to debunk the idea that universities exist merely in order to produce trained and compliant consumer-workers.

I’m a dab hand at Indian cuisine, and since living in Cork I’ve got good at cooking seafood, so maybe fish curry.

In personal life, probably the late Prof. Kate Fullbrook, a terrific and generous lecturer in American and postmodernist literature at UWE, who first put me onto Henry Roth. Also Prof. Judie Newman, Head of School, single mother, prolific publisher, and inspirational PhD supervisor at University of Nottingham. As for the more famous, a whole bunch of people, but certainly including Beethoven, Melville, and whoever invented blue cheese, assuming it wasn’t one of them.

My grand plans as incoming Chair of the IAAS involve simply attempting to continue the work of my predecessor. So, look to increase membership of the Association, and in particular to broaden the range of disciplines represented, and to continue looking for ways in which we can help students and early career researchers with funding for research. I’ve yet to work out if this new role gives me any special powers in relation to helping Bristol City get promoted to the Premiership (and subsequently European competition) but, well, it’s early days. I’m also Associate Dean for Graduate Studies in the College of Arts at UCC, and I would see one element of that role as being an advocate against the widespread notion that humanities graduates are at a disadvantage in terms of employability. Quite the contrary: when you actually ask employers they confirm the value of well-rounded individuals with information-processing skills. (And, yes, I am aware there is a tension between this and my answer to question 7, but there it is, I contain multitudes…)