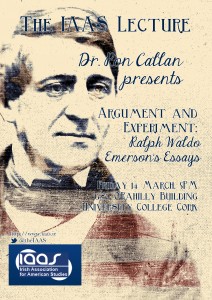 It is the great pleasure of the IAAS to report on the inaugural IAAS Lecture, delivered by the esteemed Ron Callan.

The annual IAAS Lecture will become an annual event in which a member of the Association takes to a stage in one of our third-level institutions, either north or south of the border, to deliver a talk on a topic of their own choosing. The idea is a simple one: to bring the work of the IAAS to new audiences across Ireland, to attract new members and, in turn, to help finance our support for the work of postgraduate and early career researchers.

This March 14th, IAAS Chair Philip McGowan (QUB) extended thanks to Lee Jenkins and Alan Gibbs and the School of English at UCC as he introduced Dr Callan. He continued:

‘Who better to start this new chapter in the IAAS’s history than this evening’s speaker. Lecturer here in the School of English in 1994-95, before moving to UCD for the remainder of his teaching career, Dr Ron Callan is known to many well beyond these shores, is loved by all and – and this is no exaggeration – is the reason why we can be here at all tonight. Without Ron Callan, it’s fair to say there would be no IAAS. Ron chaired the Association through some dark and difficult times between 1997 and 2003, combining that role with his editorship of our Association’s journal over twelve years, between 1995 and 2007. Ron Callan has inspired uncountable numbers of students with his teaching appointments at UCD, here at UCC, and also at Trinity as well as in the US at Dickinson College in PA and during a Fulbright Visiting scholarship posting at the University of Massachusetts in Amherst in 1986.

It is fitting that Ron’s talk tonight deals with the essays of Ralph Waldo Emerson. In ‘The American Scholar’, Emerson noted that “[t]he office of the scholar is to cheer, to raise, and to guide men by showing them facts amidst appearances. He plies the slow, unhonored, and unpaid task of observation. He is the world’s eye.”

How true this observation has been for the career of tonight’s speaker.’