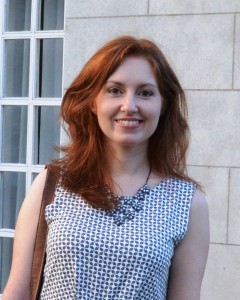 All members of the IAAS, but especially committee and sub-committee members, would like to offer a huge THANK YOU to Julie Sheridan for all her hard work over the last five years as Vice Chair and Prizes Committee Chair of IAAS. Julie has placed the reins in the capable hands of Alan Gibbs, but we would all like to express our thanks and gratitude to her for her professionalism, her warmth and her dedication.

Julie is completing a PhD on the fiction of contemporary American writer Joyce Carol Oates at Trinity College, Dublin. She holds an MA in American Literature from University College Dublin, and has presented numerous conference papers on Oates’s work. She has also given lectures and advanced seminars on American literature and critical theory at Trinity College. Her article “‘Why Such Discontent?’: Race, Ethnicity, and Masculinity in What I Lived For” appeared in the 2006 Special Issue on Joyce Carol Oates published by the American quarterly Studies in the Novel, and she has also contributed an entry on Oates’s seminal essay On Boxing (1987) to the Literary Encyclopedia. As Chair of the Postgraduate Caucus of the IAAS from 2003 to 2007, she established the association’s postgraduate symposium, now an annual fixture in the IAAS calendar. From 2010 to 2014 she held the position of IAAS Vice Chair, a role that was expanded in 2012 to incorporate the chairmanship of the newly created Prizes Subcommittee, which now oversees the allocation of travel and research bursaries among postgraduate and early career members, as well as administering the association’s biennial Peggy O’Brien Book Prize for the best monograph in American Studies by an IAAS member.