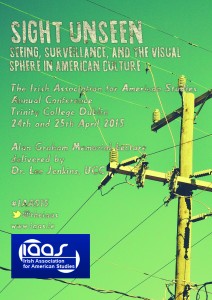 Seeing, Surveillance, and the Visual Sphere in American Culture

Standing on the bare ground […] all mean egotism vanishes. I become a transparent eye-ball; I am nothing; I see all […].

From the maps of early explorers and the surveying techniques of those who carved up the land; through the Puritans’ anxious scrutiny of their own souls and those of their neighbours for signs of Satan’s influence; up to the Patriot Act, hacking scandals, and Wikileaks, the history, politics, and aesthetics of sight and seeing, of concealment and surveillance, display and invisibility have been central to the United States’ (and indeed America’s) development as a space and a nation. Crossing disciplinary boundaries, seeing and being seen are particularly pertinent issues in our image-driven culture, ones that are increasingly being taken up by literary critics and cultural commentators as this century progresses.

This conference therefore aims to bring together scholars whose work explores the vast range of texts, experiences, and socio-political structures that touch upon and are touched by the visual realm, especially but not exclusively in relation to sight as an instrument and agent of control and discipline. “Sight Unseen” is a two-day interdisciplinary conference for scholars within the Humanities, at any stage in their careers, with an interest in North America and whose research engages with history, literature, critical theory, drama, film, visual culture, architecture, music, geography, media studies, and political theory. The conference invites proposals for 20-minute presentations on any aspect of our broad theme. Potential topics include, but are not limited to:

The submissions window has now closed

Please contact us at IAASConference@gmail.com if you have any queries.