From politics to culture, artistic creation to commercial production, civil disobedience to peaceful protest, collaboration is demonstrably of vital importance. Culture, society, history and in the Americas have been, and continue to be, shaped by collaborative endeavours. Collaboration is no less significant within academia. Interdisciplinary, interinstitutional research and authorship has increased dramatically in frequency and, for some academics, is a necessary prerequisite. Yet collaboration is an aspect of academia often neglected in the postgraduate experience.

Over ten years ago Linda Hutcheon, the then President of the Modern Language Association, made a case for the importance of academic collaboration at their annual convention. In her address she promoted collaboration between scholars as opposed to “the romantic model of solo scholars” stating, “The kind of research that needs to be done in the humanities can’t be done by some solitary person sitting in the library trying to write the last great work on ‘x’” (MLA Convention, 2000). While some, like Hutcheon, view collaboration—both within academia and in wider cultural contexts—as being highly beneficial, for others it represents “traitorous cooperation with the enemy.” Postgraduate research remains, for the most part, aligned with “the romantic model” of solitary work. With this in mind, this one day conference will engage with both the academic practice of collaboration and collaboration as a theme in American Studies.

We are particularly interested in proposals for jointly produced and presented papers on any area of American studies but also welcome the submission of proposals which engage with our overall theme, on topics including but not limited to:

This conference will be preceded by a postgraduate workshop, sponsored by Historians of Twentieth Century United States, and attendees are invited, and welcome, to participate in both days of the event. BAAS, HOTCUS and the organising committee are committed to keeping the cost for attendance as low as possible for postgraduates; £15 for both days, £10 for one.

“Let me tell you something. There’s no nobility in poverty. I’ve been a poor man, and I’ve been a rich man. And I choose rich every time” – Leonardo DeCaprio as Jordan Belfort, The Wolf of Wall Street (2013)

The Great Recession beginning in 2008 was a firm reminder of how North America’s financial instability affects our lives the world over. Yet a global focus risks ignoring the particular images and experiences of inequality within Canada and the U.S. themselves. From the patriarchal log cabins of the Canadian Rockies and the American Mid-West to the homogenous suburbs of the 1950s, North American economic identity has often marginalised racial and sexual difference.  Parallel fears of elites were conveyed in the populist movements of the Tea Party and Occupy. In light of recent events, we should ask: how can or should we engage with financial inequality as experienced by North Americans? How do we parse cultural representations for insights into the continent’s divide between rich and poor? How representative is The Wolf of Wall Street’s Jordan Belfort in expressing North Americans’ desire to ‘choose rich every time’?

For Lauren Berlant, a ‘cruel optimism’ keeps us attached to promises of the good life despite the retrenchment of post-war welfare programmes and social democratic ideals. Indeed, this denial often ignores higher African American and Hispanic unemployment rates. Such intersections between identity and economic inequality, whether in the present or other historical periods, form the basis of the upcoming international conference organised by 49 Parallel: An Interdisciplinary Journal of North American Studies. Proposals are invited from postgraduate and early career researchers in American and Canadian studies, history, English, politics, philosophy, sociology, art history, economics, film and television studies, international relations, and other appropriate disciplines. Topics for papers may include, but are not limited to, the following:

We are delighted to welcome Dr. Paul Crosthwaite from the University of Edinburgh as our keynote speaker.

The deadline for submitting abstracts is the 12th of January 2015.

UPDATE: Due to overwhelming response to our CFP, we have decided to extend the deadline to the 23rd January 2015.

Abstracts should be no longer than 300 words and should include an additional biography of no more than 75 words. Please e-mail proposals to editors@49thparalleljournal.org. Registration for the conference is £15. Travel and accommodation costs will not be covered. 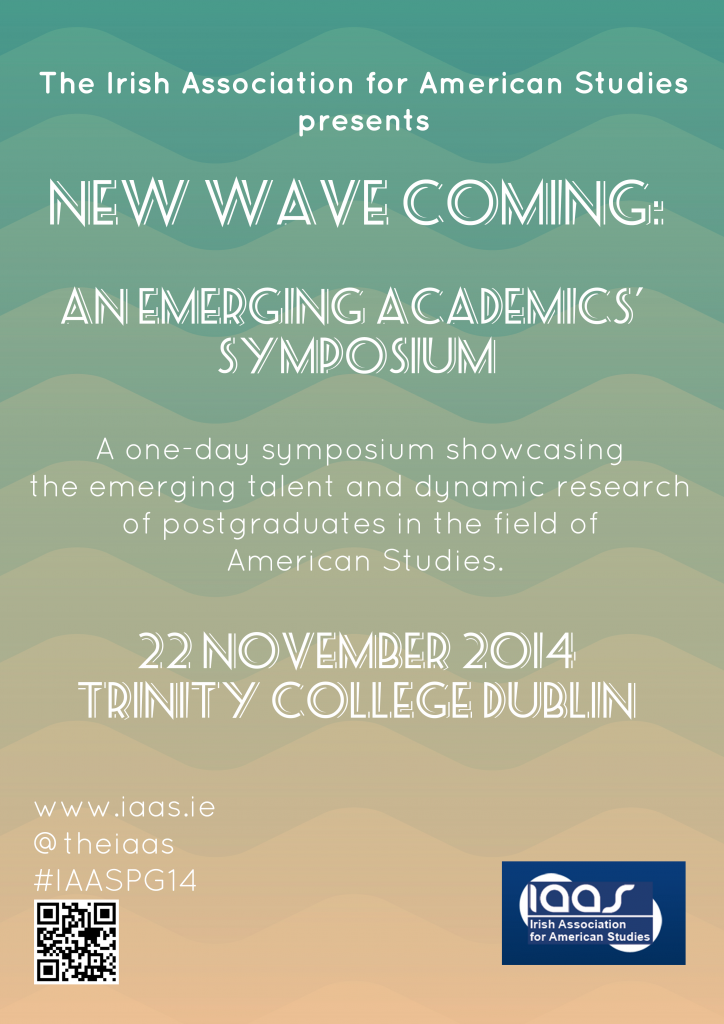 The Call for Papers for the 2014 IAAS Postgraduate Conference is out now.

For all information on the symposium, or to submit an abstract, please visit http://iaas.ie/iaas-postgraduate-conference/