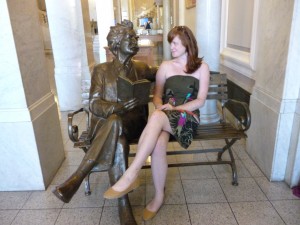 In September I returned from a three month research trip at the University of California, Berkeley; the home of the Free Speech Movement.

I’ve reflected a lot on my time in Berkeley. Writing about the experience has certainly helped clarify my thoughts, to fully appreciate what I achieved in a relatively short period. However in the weeks following my return, when friends and colleagues enquired about my trip I inevitably replied with a long pause, a furrowed brow and a drawn out ‘Well….’ as I tried to describe an experience that defies summary, and a city full of stark juxtapositions between poverty and wealth, history and technology, 60s ideals and modern-day reality.

My confusion at the time was a reflection on the state of the work I did there: a lot of ideas, a sense of achievement, reams and reams of notes with very little structure or a purpose that would be evident to anyone other than me. The readjustment to my regular regime since my return has been even tougher. Three months on the other side of the world, away from the distractions of daily life, commitments, friends and family would seem, to a normal person, a sad and lonely time. For a scholar it was a dusty, silent heaven. Nobody wanted coffee, ever. It was just me and the library, all day, every day.

I went into the experience with much trepidation. Aside from the logistical issues that come with spending so much time so far from home, I wasn’t sure what I was supposed to achieve, what a research trip entailed, how I would force myself to spend three months in a library and not outside in the sunshine?

I sought advice from everyone. I attended a seminar on archival research (a command performance, I suggested a friend give it), and came up with a clear set of questions for myself:

What can I achieve in Berkeley that I could not achieve at home?
What items in the Bancroft Archives are of interest to me? More importantly, what items are of relevance to me?
What single achievement would define this trip, what single purpose would make the financial and familial sacrifices worthwhile? 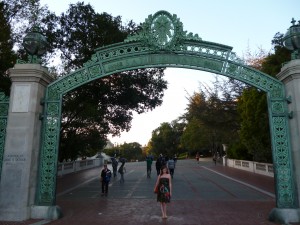 Answers started to present themselves almost immediately. The UCB library is truly state of the art, with an extensive American Studies collection. There is no resource required for my research that this library could not provide. Three months suddenly started to seem like a very short time: I needed to prioritise. What could I only read in Berkeley, that I could not get through my library at home? A much more manageable reading list quickly emerged.

Secondly, what material could I access in the Bancroft Archives that would be of relevance to my research? My friend advised me to approach the archive with specific questions that I may find answers to, but also suggested I go in with an open mind. This turned out to be excellent advice: my curiosity was roused by the Free Speech Movement, and my research explores, to an extent, connections between Kurt Vonnegut and Joseph Heller’s books and the anti-war movement and associated protest movements of the 60s and 70s. What I really wanted was some sort of concrete evidence (beyond Kurt Vonnegut’s constant assertions that yes, he was very inspirational to the anti-war movement) that students at that time were reading Catch-22. (Slaughterhouse-Five was not published until 1969, so not much chance of popping up on FSM reading lists…) I related this to the Special Collections librarian, pondering out loud more than asking for help, and she recommended Seth Rosenfeld’s Subversives: The FBI’s War on Student Radicals, and Reagan’s Rise to Power, a recently published history written in a pleasant journalistic tone, focusing very much on Berkeley’s Free Speech Movement. Rosenfeld, the librarian told me, had done much of his work in the Bancroft Archives. I checked the book out and settled into a beaten leather armchair in the Morrison reading room, where laptops are outlawed. I was completely submersed, free from interruptions, and eventually had my ‘Eureka!’ moment:

“The second issue [of Spider, an underground student publication], for example, critiqued an article about reading trends on campus that had appeared in The New York Times Book Review. Spider challenged the Times’s claim that J. D. Salinger’s The Catcher in the Rye (1951) and William Golding’s Lord of the Flies (1954) – both fundamentally apolitical works whose protagonists are adolescents had the greatest following among college students. This was out-of-date, according to Spider, which suggested that readership of Joseph Heller’s anti bureaucracy novel, Catch-22 (1961), and James Baldwin’s tale of Greenwich Village bohemians, Another Country (1962), provide a more accurate gauge of current student interests” (Rosenfeld, Chapter 16).

Leaping out of my seat in the Morrison I returned immediately to Special Collections, lodged a request for all copies of Spider, and spent the rest of the afternoon pouring over them, grinning from ear to ear. The librarian assured me that ‘Eureka!’ moments are fairly common in the Bancroft Reading Room.

The most important thing however, that which quickly became my primary objective, was securing an interview with author Tom Robbins. He lives in La Conner, Washington, a town he references frequently in his work. I was as close as I was ever going to be, and decided to do everything in my power to secure an interview. I was utterly stumped as to how to go about it. From limited experience in the publishing field I knew that authors were contacted via their agents, and further I knew the name of Robbins’ agent because he had written about her many times. She was without internet presence, and being a child of the internet, this flummoxed me. I perused Robbins’ online fan base, the AftrLife, which has not been maintained in some time. I emailed the editor of that site, seeking advice: nothing. I had an address for a PO Box for fan mail, but being a very serious literary scholar did not wish to go down this route. Then, one day, I received a Google Alert which directed me to a website that mentioned Robbins’ forthcoming autobiographical collage, hinting at a change of publisher. I took a chance and emailed the new publicist.

Several weeks and several more emails later I found myself driving through the blackberry capital of America to La Conner, in Skagit Bay. I took meticulous care with my appearance. I wanted to come across as scholarly, serious, but also unpretentious. I wanted to ask intelligent questions, but also wanted Mr Robbins to feel at ease with me; he is notoriously suspicious of academics and has written several damning (and often hilarious) tirades against our kind. Mr Robbins, apparently, also spent some time on his wardrobe that morning. Greeting me in the local book shop he lifted his trouser leg showing off green socks and green shoes in honour of my Irishness, informing me with a wink that he had dressed for the occasion. He gave me almost two hours of his time, answering my questions honestly and openly, commenting on my ideas about his work, his ideas about humour and play, and even a little anecdote about Kurt Vonnegut – but I shall have to save that for my thesis. During the course of the interview I mentioned Tony Vigorito, the only other living author in my study: 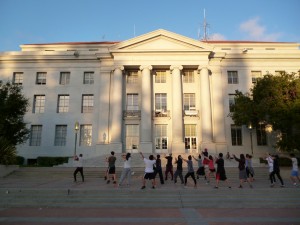 “I’m very fond of Tony,” said Tom, and after we discussed Just a Couple of Days for a moment, and its relevance to my research, he followed up with “I think he’s living in San Francisco.”
“You’re kidding me, I thought he lived in Hawaii?” I replied. This is nonsense, Tony Vigorito does not, nor has he ever, lived in Hawaii. I don’t know where I got this from. “Oh, I have to find him,” I said.

When I landed back in San Francisco I had an email from Tony Vigorito. Tom had told him to get in touch with me.

I interviewed Tony a week later in Guerrilla Cafe on North Shattuck, the day before I returned home. He was on his way back from Burning Man.

It just doesn’t get more Berkeley than that.